ArtsWorcester > Announcement > Framing the Future: A Letter from the Director 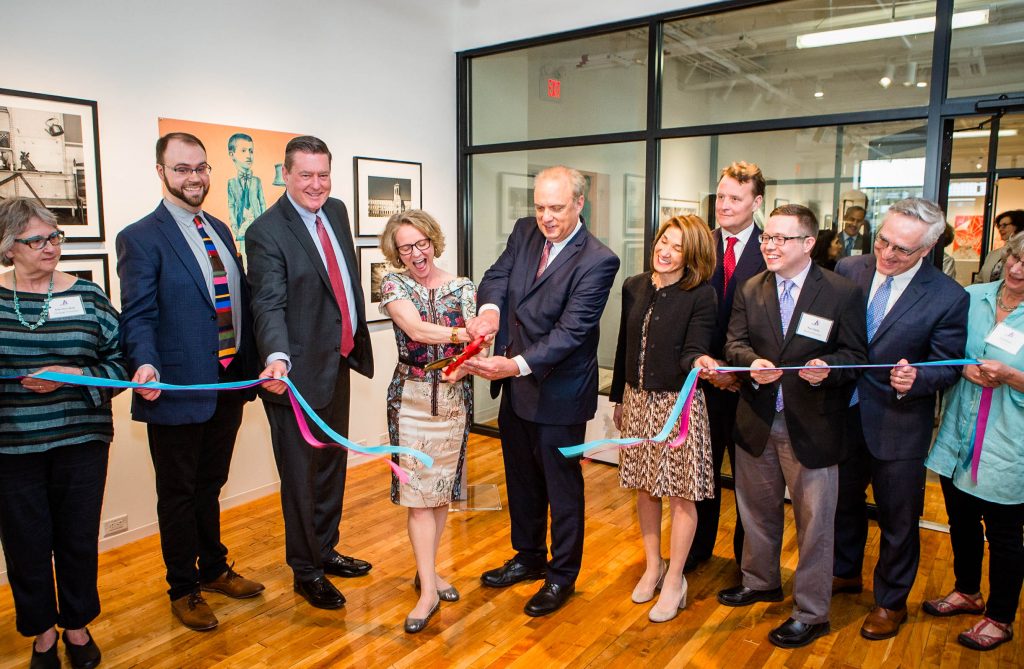 Ribbon cutting at our Campaign Celebration, May 8, 2019

From a Happy and Grateful Director

In early 2017, ArtsWorcester was offered an extraordinary gift by the Davis and Wade family: the construction of new galleries and offices in the historic Printers Building, on Portland Street. In order to accept, and to make best use of this opportunity, we had to raise significant money beyond our annual operating budget. New equipment and furnishings would be required, as well as expanded gallery hours and audience engagement for the new site. We also needed to begin an endowment fund, so that we could maintain the beautiful new galleries and offices. Our board of directors voted to meet this challenge–and made the first gifts.

Thus began ArtsWorcester’s first capital campaign, Framing The Future. An enthusiastic committee, chaired by J. Christopher Collins, set an ambitious goal of $1.25 million, and got to work. We sat down with old friends of ArtsWorcester and people new to our work to ask for their support. Foundations gave generously, artists dug deep to help build their new home, and a growing community of friends enthusiastically added their support. Framing The Future was met with an unstinting generosity equal to the opportunity that spurred it.

Construction on the new galleries, with our team led by board member and Clerk of the Works Ryan Hacker, began last fall. Seven months later, our new doors opened to the public with a splendid exhibition of works on paper, celebrating the industrial heritage of the Printers Building. That day, Portland Street changed, with our storefront windows opening the gallery to the sidewalk, and the first waves of visitors up and down the block. This month, the Eighteenth ArtsWorcester Biennial served as the occasion for the grand opening, and continues to host celebrations, facility tours, and many happy visitors.

At the most recent of those celebrations, we announced that gifts to Framing The Future now total $1.75 million, well exceeding our original goal. Our gratitude to its supporters knows no bounds. Thank you to all.

Below, we gratefully acknowledge the individuals, companies, and foundations who have supported this project so far. If you wish to be among them, gifts to Framing The Future will be accepted through June, when we finalize the sign in our foyer and the full report that recognizes this community’s outstanding generosity.

Even in this celebratory moment, we know our work is not done. The services ArtsWorcester provides to artists and to the public must be sustained, and our endowment built. In this year of our fortieth anniversary, we must continue to secure the organization for the decades to come. But from this foundation, built by so many, we move forward with great confidence.

All are invited to see what has been built here. These galleries belong to artists, to their audiences, and to the city we serve. Please come and share in our joy.

Framing the Future: The Campaign for ArtsWorcester
2018-2019

These individuals gave generously to ArtsWorcester their advice and experience, and we thank them for these valuable gifts as well.

The accuracy of this list is important to us. Please let us know if we have erred in any way, or if you would like your generosity recognized differently.